When I say I am a chicken mama I mean it

When I decided to have a business and design business cards, the first thing I wanted under my name was Chicken Mama.  When I hand those cards to everyone from fellow shoppers in the grocery store, to pretty much everyone I meet, they always comment on the chicken mama thing and laugh. 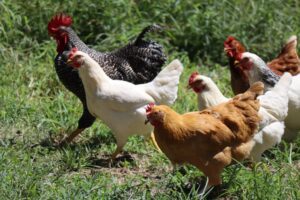 Photo by Zachariah Smith on Unsplash

I do love my chickens and over 5 years of caring for them, I have learned lots.  I have seen their fun ways of scooping up worms from the soil, to doing their little scratch dance and poking sideways in the ground with their beaks to scavenge insects.  They come running when anything gets scattered and hits the ground.  I love to see them roosting at night under their lamps and poised in the laying boxes extruding the miracle of a perfect egg.

I was alarmed to see their relaxed pose of laying pretty much on their sides in the sun where they look ill and possibly dead, but in fact they are sunning.  Dirt baths are incredibly fun to watch.  Seemingly, much like our bees, chickens really don’t need much from us humans.  I steal the bees’ honey and the chickens’ eggs, but trade for food and shelter!  I think it is a fair trade.

The chickens take care of insect infestations by spreading that dry dusty dirt in between their feathers on their skin and rolling in the dust.  They drink out of puddles and can find food.  They really are pretty self-sufficient and have an entire hierarchy and society that they understand the rules of.  It is truly amazing.  I do think they appreciate the help I provide and daily feed and treats.  We live well together.

The books I read to prepare myself to have chickens left out a whole bunch of stuff which I had to learn by trial by error, googling and asking other people who have chickens for advice.  Some of the lesser fun things I experienced have been mites, molting and other things that make their beautiful feathers fall off and scatter to the winds.   I have also witnessed their murders by varmints and completely selfish and heartless acts of menace they inflict against injured or sick animals, and this is what I am going to write about today.

Last year we had a chicken who was a good egg layer, but she injured her foot somehow.  Ellie never healed all the way and has a pretty significant limp.  When I saw that she was getting picked on by her sisters, and it was getting relentless like they were trying to kill her (Darwin anyone and survival of the fittest), I intervened and moved her outside our house to an old dog cage that I propped up a few feet off the ground.  I put cardboard and bedding down, gave her food and water and placed her in there.  Quickly, she started healing up and when her lacerations healed and her feathers grew back, she wanted to roam about so I took her out of the cage and made her a bin that she could relax in at ground level and she spent her days roaming short distances, eating bugs and seemingly enjoyed her life.  By dark she would put herself back in her cage.  I used to shut it at night but honestly, nothing is going to jump that high to get her, so she roosted in the doorway most nights.

As the weather turned colder, I came up with a plan to keep her warm.  I wrapped her cage with a porch furniture covering to protect her from wind and rain and snow, put a heating pad in under the cardboard that I could program for 12-hour increments and added a heat lamp.  Ellie had a whole condo now that she loved.  Occasionally, one of the other girls came down and would eat with her but no one was bothering her.  The girls up the hill seemed to understand momma would not tolerate mean girl behavior.

About 7 weeks ago, Emma, who was my little sister’s chicken and the oldest of my bunch started acting strange.  She was no longer the one in charge, was not spending time knocking Mitch’s tools off his workbench and she wasn’t coming for morning yogurt, corn and scraps.  When I saw her sitting in the rain looking completely forlorn, I knew I had to do something. 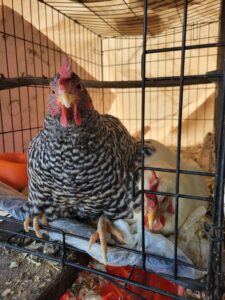 Ellie and laying beside her is Emma

I thought maybe Ellie would like some company.  Emma was getting older and had lived a good life, but she was definitely on her way to the henhouse in the sky.  We were not going to end her as we have done in the past (thank you Mitch)  and since we now had a hospital, we could relocate her to the condo.

I picked her up which she was always good about and deposited her to Ellie’s cage and she settled right under the heat lamp and took a nap.

When she woke up. I gave her some corn and yogurt and Ellie got a bowl too.  They dined and clucked.

There are days that Emma doesn’t seem to feel well at all and sleeps most of the day, but she always enjoys mealtime and both girls appear to like having a roommate.  We now jokingly call the condo a hospice as Emma certainly doesn’t have long to live, but she has lived 7 weeks so far and doesn’t seem to be getting any worse.

Every morning when I take out breakfast, I fear Emma will be feet up in the air, cold and stiff.   I do wonder if Ellie will miss her when that happens.  They cluck and talk together and I see them cuddle up for warmth and possible comfort.  They really aren’t that different from us humans with their basic needs.

So, my chicken hospice is currently thriving.  One day there will be no more chickens on our back lower deck but for now, chicken mama is doting and happy that the spring has brought some bugs out for them to eat and warm breezes to enjoy. #ilovemychickens #birdsofafeather #chickenmama