Being Jewish in a Gentile world 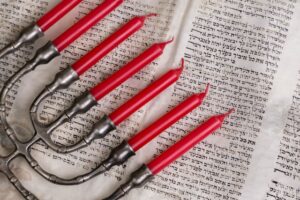 Photo by Diana Polekhina on Unsplash

I was born a Jew but I didn’t know growing up if I was REALLY Jewish or if it was something my parents exposed me to.  My paternal grandparents were Jewish and they adopted my father.  There was a culture of not talking about that apparently and my father never knew anything about his birth parents nor found any records.  There was a lot of rumor and innuendo about my grandfather’s businesses.  He was a well-respected pharmacist in the little town of Ambridge, PA.  He was involved in the Rotary, President of the Lion’s Club and probably others.  Apparently, my grandma was a member of Eastern Star.  My dad tells me he heard my grandfather carried illegal alcohol in his pharmacy wagon during prohibition, ran “numbers” and may have helped unwed Jewish women find homes for their babies in the 1940s and 50s.  My dad could have been one of those babies.  Apparently, my grandparents were unable to conceive children.   Whether or not my grandpa paid a Jewish woman $10,000 for my dad will never be known, but it is an interesting thought.

My dad was raised Jewish and he married my mother who was also raised somewhat Jewish but was not officially in the faith so she went through the conversion process which is pretty intense. My parents married in a civil ceremony but when my mother’s conversion took place, a Jewish wedding was held at the synagogue and I was cooking in my mother’s belly at that time so…..  according to Jewish law, born of a Jewish woman, I’m a Jew.

My first 6 years were spent in Ambridge, PA, a little town along the Ohio River. My mother and I moved to Squirrel hill in 1974 when my parents divorced.  I spent half of first grade through 5th grade with lots of Jews.  At that time, Squirrel Hill was definitely “Jew Town,”, MY words and I honestly seem to remember that Mineo’s pizza was actually closed during Passover when Jews are to abstain from flour. 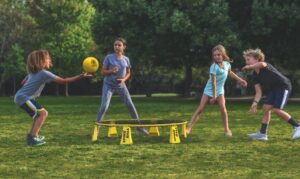 Photo by Spikeball on Unsplash

Before 6th grade started for me, we moved back to Ambridge and I began school in a 99.8% Christian filled school system.  In fact, there was only one other Jew in town.  As there once was a thriving Jewish community in Ambridge, when the economy started to tank in Beaver County, I think all the Jews moved to Pittsburgh or Florida.  It wasn’t I don’t believe, anything about discrimination or anything, but I honestly have no idea what led that mass exodus.  So, Jews were very scarce around me and I felt very much ill at ease as I grew, admitting to the fact that I was Jewish.  I think being any kind of minority, if you are perceived as “different” expect some bumps in the road.  Not, that I could do much hiding as my name was Feinstein, but being very insecure, I definitely kept my nose down and was not even the hint of the woman that I am now full on OUT and proud.

Did I get bullied in school?  Yes.  Did I keep a low profile so as not to stand out? YES. But my name screamed JEW so there it was.   I pretty much lived my youth as quietly as possible impatiently waiting to make a break for it in 1986 and head back to Pittsburgh and attend Pitt.   In college, I ran into lots of fellow Jews from my elementary school days at John Minadeo and there was a very diverse community of people, religions, cultures and more.

Everywhere I moved during my 20s, 30s, 40s and now in my 50s, I carefully looked around for other Jews near me.  When I co-owned the hardware store with my ex-husband in Sarver PA, I was told there is a KKK group there so to lay low and don’t wear my Star of David.  I would NEVER want to jeopardize our business or alienate our customer base, so I was quiet.  One day I was helping a customer with something in the lawn and garden department and this man said something to me about “Jewing him down.” I literally walked away and asked one of my employees to help him.  I wonder what he thought.  I am betting he didn’t even realize what he said.

Years later, Mitch and I bought our cabin up hear Pymatuning and I met a neighbor who introduced himself as Gene Benkovitz (not his real name) . I immediately filled with excitement and said, I’m a Jew too to which he replied, I’m not a Jew.  My stomach dropped and my first thought was WOW, you look like a Jew and second, I blew my WASP cover as a Cassel and we hadn’t even moved in yet.  I was a bit worried.  Seriously, there are hate crimes everywhere against all sorts of people.  I felt embarrassed.    I can tell you in my heart after reading countless books on the Holocaust and seeing so many documentaries, if we checked his DNA, that man was a Jew but a hidden one for generations back.  After Hitler came to power in Germany, being a Jew was dangerous and caused many people to change names, religions……  Jews went into hiding and many never came out.

So, speaking of DNA, when 23 and Me came about, I asked my dad if he wanted to do it so we can maybe find some blood relatives and learn about family medical history etc.  He was up for it so we sent in both our saliva samples and guess what we found?  Despite us both being blond haired and blue eyes (the ARYAN DREAM combo) it came to be that dad was 50% ASHKENAZI Jew.  I told him, dad, you are OLD school Jew like related to Noah and stuff.  We had a good laugh at that.

We did find out who either his mother or father were.  We were lucky to find a really close relative who did a ton of genealogy work.  We figured either his great aunt or uncle were my dad’s mother or father.  Neither one ever married or had any children that anyone knew of and they were alienated from the family so there wasn’t much there except pictures and names.  They are all long gone now but we have about 1100 cousins running around the world.  Some I have connected with on FB and it is great fun to see their families all over the planet, speaking many languages and all Jews!  I finally have some paternal family!

I am an avid listener to the Howard Stern Show on Sirius/XM radio.  He’s a Jew and I just love his interviewing style and his profuse use of the F word.  I enjoy swearing too.  I apologize to those readers who get offended by curse words, but I do like to cuss and when I am around my friends, I let it fly!!!! Check out the Netflix series on the History of Curse Words with Nicolas Cage.  It is hilarious and educational!!!!!

Anyway, recently Howard was interviewing Sarah Silverman, one of my favorite comediennes who is Jewish and also likes to swear.  She talked about being typecast as an actress and only getting roles as the annoying literary agent or the (really bad word) girlfriend, or sassy friend of the main character and other stereotypical roles.  She also said roles about Jews are mostly played by non-Jews, RBG and Mrs. Maisel.  Winona Rider in her 50s is actually playing a Jewess on a really interesting HBO series now.  The plot is set in WWII and Charles Lindbergh is a powerful politician and a big time Anti-Semite which apparently has factual basis. Sarah remarked with a well-placed F-bomb that Winona would never have gotten the role in Age of Innocence and other great roles in her youth if she had she been Winona Horowitz.  I kind of agree.

This blog isn’t about discrimination though.  It is more about ignorance or lack of interest in anything non-Christian. I will end with a funny story that illustrates that point from the event that actually inspired this blog.

I am having a Passover Seder this Saturday night.  Traditionally, Jews have this meal and ceremonial retelling of the Jews’ exodus from Egypt on the first two nights of this long holiday. 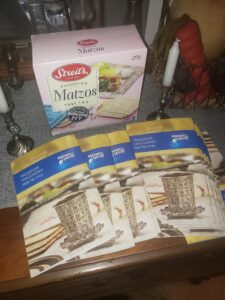 I was shopping at Giant Eagle for some Jew supplies, Kosher for Passover Matzo and Matzo meal, and saw this big display of Maxwell House coffee with Passover Haggadah’s.  If you bought a Maxwell House product you could get one FREE Haggadah.  Maxwell House started doing this almost 80 years ago but I hadn’t seen this in action for decades.

I thought, I needed new Haggadah’s and wanted one for each of my guests so I asked at customer service if I could have 12 copies.  I showed her the booklet and she asked what it was.  I explained.  Blink blink was the response.  So, I asked if she had ever seen the Ten Commandments.  “Let me get a manager,” she said.  GOOD.  Now we are getting somewhere.

The manager comes out and I start again with my request and this time I explain that there are probably 5 Jews in Washington including me and they will most likely toss those out in less than 2 weeks so giving me a dozen, won’t even be noticeable.  She asked me to show her the display.  There were a plethora of copies and she said, take what you want.   So, I bought one Maxwell House product and took a dozen Haggadah’s and now each of my guests will have their very own without having to share.

I am 100% sure neither one of these ladies know what Passover is, what one might do on Passover, eat or talk about yet I and probably every other American Jew knows about Easter and not just about Easter bunnies and chocolates.  The world population of Jews is now only .2%.  That is staggeringly low so no wonder there isn’t a lot of general world knowledge about Jewish holidays and customs.  Jews know about the core beliefs of Christians and WHY they celebrate.  I am not complaining, but merely bringing up a point that if we take an interest in our differences, maybe we can all learn to appreciate what makes us similar too. There is much more that brings us together than divides us.

Looking forward to my Passover Seder and introducing my “daughter,” Jaya to all things Matzo and her first Jewish holiday.

Happy Spring peeps and wishing you all the joys, delicious foods, new growth and holidays coming to your world. #passover2021 #covidseder #weareallhuman